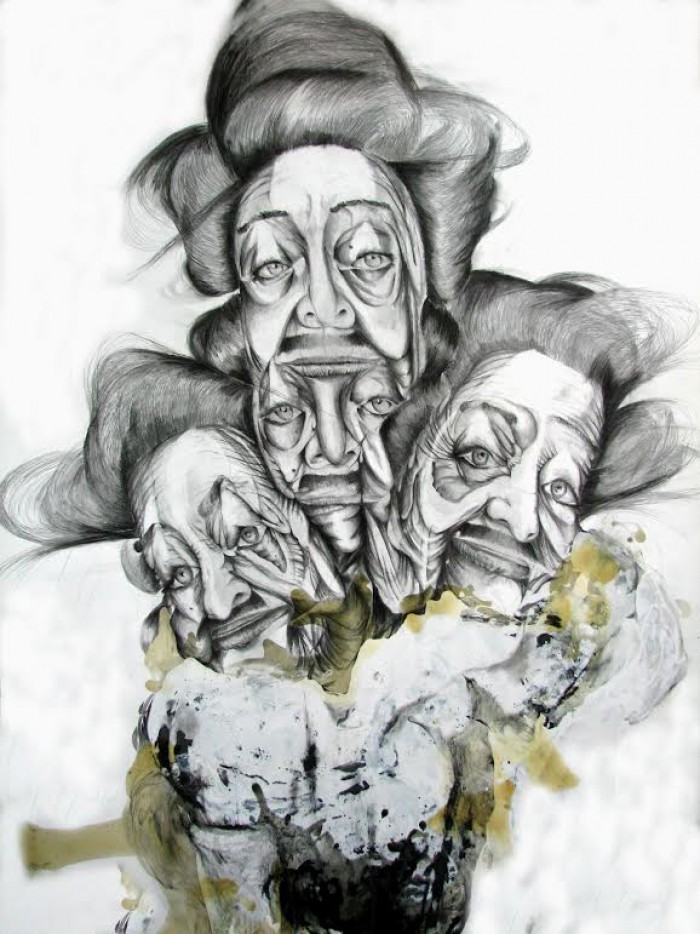 Aviva Uri, was born in Tzfat in 1927 and passed away in 1989. She emerged in the Israeli art scene during the early 50's. Due to her art work and her unique public persona, she became a living legend. The 'poverty' of her materials and her authentic style, became the stepping- stone for the local art scene during the 70's and onwards. In academic research she is described as having no "mother" or "father", no artistic influences or roots.

Roey Heifetz was born in Jerusalem in 1978. He is a young artist who lives and works in Tel-Aviv. His monumental drawings of pencil & graphite on paper, combined with various industrial materials, allegedly aim to re- create an inner world of fictional, distorted, grotesque figures. However, a deeper observation reveals that every small fragment of the large-scale drawings is a microcosm of lines and forms; a formalistic investigation of the abstraction and deconstruction of the figure. The direct encounter between the pencil, the industrial materials and the perishable paper, stand in the front of his artistic interest.

The visual and intergenerational meeting point between Uri and Heifetz is an outcome of a prolonged dialogue with Heifetz, who views Uri as an inspirational character, who deeply affected his artistic journey. His work, seemingly portray strength and fortitude but on a second glance can be seen as fragile and vulnerable. Uri's smaller pieces, with their urgency to embed her signature on top of the withering paper, reveal emotional intensity. Heifetz's monumental, figurative drawings opposite to Uri's abstract pieces- bare a similar concern; the investigation of forms, abstraction, low-tech materials and the need for the most unmediated, direct expression of their inner world. A Way of Thinking