"Women Make History" at the Haifa Museum of Art

The current cluster of exhibitions at the Haifa Museum of Art is "Women Make History". We are pleased to have works on loan by Roey Heifetz in the exhibition "Hybrids, Creation of Wonder", and Liat Elbling in the exhibition "The Sex Which is Not One*".

"Well-behaved women seldom make history," contended historian Laurel Thatcher Ulrich in 1976, and feminist discourse enthusiastically adopted this statement. From its beginnings feminism sought to liberate itself from binding social mechanisms, by means of groundbreaking practices meant to subvert a reality of silence and compliance and replace it with one of speech and protest. This position opposes the "niceness discourse," meant to resolve political and social conflicts of interest. The meaning of the "niceness" discourse, in the feminine context, is the wish to make women "nice" and bind them to the emotional and domestic spheres, thereby denying them political power.

This exhibition cluster centers on the following question: in the wake of a lengthy feminist struggle, has a revolution in traditional gender roles indeed occurred in the political space? The cluster seeks to present the ways used by women artists to create new spaces of freedom and to confront gender-based power arrangements. Can women today make alternative history and, in the future, lead a true revolution? 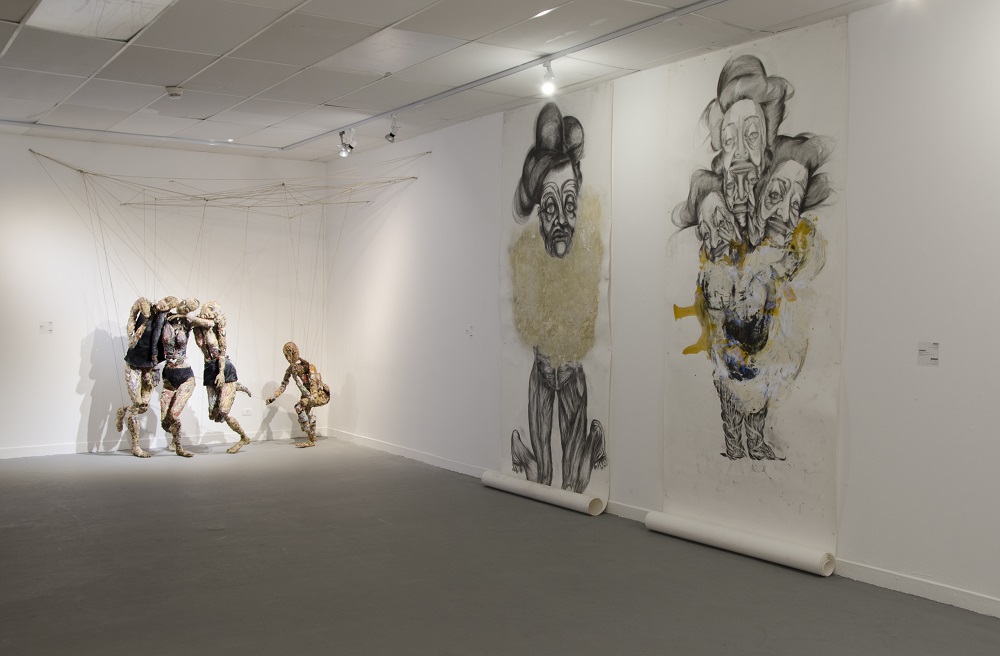 Installation view of Roey Heifetz, "Trio", 2011 and "On Her Knees", 2014, on view at the Haifa Museum of Art in the Exhibition "Hybrids, Creation of Wonder". Image Credit: Stas Korolov

Installation view of Roey Heifetz, "Trio", 2011 and "On Her Knees", 2014, on view at the Haifa Museum of Art in the Exhibition "Hybrids, Creation of Wonder". Image Credit: Stas Korolov

Installation view of Liat Elbling, "Untitled", 2007, on view at the Haifa Museum of Art Exhibition, "The Sex Which is Not One*" Image Credit: Stas Korolov Installation view of Liat Elbling, "Untitled", 2007, on view at the Haifa Museum of Art Exhibition, "The Sex Which is Not One*" Image Credit: Stas Korolov

Theoretician Rosi Braidotti has argued for the need to create a new female subject wielding feminist knowledge, including new ways of knowing and conceptualizing the world; she envisions a generation of voices that dare to create political power expressing the hope for a different future. This cluster emphasizes the power of solidarity between women in establishing a new order that can rise above boundaries, blocks, and barriers. It indicates the need to distinguish between common and differing elements affecting women from diverse countries, cultures, and sexualities, and to generate a cultural vision that can lead to the creation of an alternative collective space.

This discussion is related to the age of "transnationalism" – a concept that emerged in the 1990s following widespread global migrations, mostly resulting from violent conflicts in the Balkans and the Middle East, as well as in other countries. This major phenomenon led to the appearance of a discourse of new identities in the feminist context, among others. According to scholar Tal Dekel, "Even though multicultural discourse in general and feminism more specifically have made some headway, along with burning issues like migration within Europe and outside it, the hetero-European canon remains rigid and exclusive. The artistic hegemony will not easily forego its privileges."

Many of the women artists participating in this cluster take the position that silenced and excluded groups can no longer be ignored – groups such as immigrant women, women from the Third World, or women from formerly Communist European countries. These artists engage in a complex discourse that addresses the world of women with reference to diverse geographical, cultural, and psychological spheres. Many of them use their own bodies and personal histories as raw material.

The works in the cluster emphasize that "Woman" is a hybrid of conflicting identities. Women must deal with conflicts arising from the cultural gaze that tends to prefer unequivocal definitions of identity. By contrast, their hybrid existence encourages practices of resistance and the creation of new identity categories, inherently opposing the non-fluid understanding of the "identity" concept. In Israel as well, a contemporary artistic trend seeks to revise rigid identity categories – such as Mizrahi women, lesbians, religious women, Palestinian women, etc. This trend reflects the understanding that such a division into groups weakens women's solidarity and political power.

The cluster examines the challenges facing contemporary feminism, in its attempt to propose an activist platform allowing for significant dialogue between groups and cultivating new feminist knowledge. Contemporary discourse has come to realize that feminism is a global and comprehensive issue, as stated by scholar Chandra Talpade Mohanty: "Now is the time to look at the variety of the situation of women, a variety that examines the similar parameters between and within cultures, classes, religions, types of sexual identities, etc. The 'similar difference' between women, context-bound, complex, and fluid, suggests exciting approaches to the making of women's art in a transnational age."