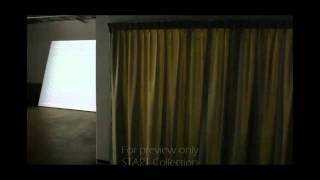 In her exhibition Sun before Sunset (1) Nevet Yizhak examines in a nostalgic but sobered view the evolution of cultural tradition, its transference and re absorption, within a reflective reference to time dimension.Out of an abstract uniformed syntax of tones sound samples of singing, playing and applause, three artworks interwoven within each other visually and thematically can be seen in the gallery space. These are digital ready-made works, manipulated and deconstructed found footage, image and sound assemblages, created through minor operations of cutting and pasting, editing and animation that disrupt traditional aesthetic models and create new compositions.Following the observation and investigation of visual and musical traditions from popular and high culture as well – such as Arabic classical music or conceptual aesthetics of the oriental ornamentation, Yizhak examines the way those are delivered and transferred further on. At the same time Yitzhak manages to object them through a reformulation in a personal and original voice.In this exhibition Nevet Yizhak continues to deal with the connection between sound and visual image as raw materials which nourish each other, creating a new context between the visible and the heard and providing reading to the artistic work while focusing in the visitors experience through looking and hearing.

The works Ya Alby and Star Quality (2012) based on television broadcasts of the mythological concerts of Umm Kulthum complement each other to a large extent. The work Ya Alby is an installation composed of a heavy theater curtain which closes the gallery’s balcony from which sounds of cycling singing ("mawal" in Arabic) and applauses sampled from one of the concerts erupt. The repetitive action of curtain opening and closing screened gives life to the static curtain as if at any moment Umm Kulthum's image along with her orchestra would present themselves before the visitor. The video work Star Quality presents a "sculptural" frame, a processed segment from a concert. The indisputable Diva of the Arabic musical world appears in fully splendor, holding a handkerchief in her hands – her distinctive trademark, and covering her face with it.

Yitzhak deconstructs the performative act and its various components, separates and disconnect them in an "artificial" way and moves the occurrence focal from the concert stage to the screen carpet. Although the performance experience is present in the show, the featuring works function as a fragmentary collection of a stage performance – a closed curtain with a imprinted memory of opening and closing, a soft echo of sound, a treated segment from the concert, a symbolic theater stage covered with a carpet (reverberation of the carpets that used to decorate Umm Kulthum’s stage concerts). The direct intimate encounter and the powerful strength of the censorial experience to be built between the singer and her fans actually do not exist. The expectation remains unfulfilled.

(1) The song Sham El Aseel was written by Beiram El Tounsi, composed by Riad al – Sunbati.
This text was written by Sally Haftel Naveh for the Kav 16 Exhibition.