In his book - 'L'espace critique: essai sur l'urbanisme et les nouvelles technologies' (1984), Paul Virilio claims that accidents are an outcome of science and not its misfortune. According to Virilio, every innovative technology produces a new kind of accidents that could not exist before. The technology, with its different forms and manifestations, such as its use at times of war, in the virtual sphere, creating virtual and physical realities - ultimately changes not only the perception of space and social structures on a global and national level, but also modifies the individual itself.

Virilio argues that the new time-space concept, generates the decentralization of populations and the disintegration of the city; it changes the perception of territory and sovereignty. The city, moreover the space, no longer functions as an individual and social critical instrument. The new and pendent structure of space is used to gain colonial political power, such that disinherits groups and individuals from their rights. The city, no longer serves as a Polis for the political occurrence; it loses its status as a law and order based sphere.

In Poetic Catastrophe Tamar Roded, Peleg Dishon and Ran Slavin offer a poetic outlook on urban catastrophe, which seemingly leaves no place for the individual. Tamar Roded exhibits destruction that embodies a visual dissonance. Her large scale paintings describe the moment before the ultimate demolition, before the emptiness; a frozen moment that captures the scattering explosion in all its glory. Ran Slavin explores a futuristic viewpoint on a futuristic city. By using photographs that were taken in the Gush Dan area – Tel Aviv, he manages to process the familiar urban scenery into a futuristic city - The city is hectic and crowded, leaving no space for the human being. Peleg Dishon exhibits light boxes, made out of scanned paper-cuts. The outcome reveals a sense of desolation, leftovers from the moment that can no longer be affected by time. Roded, Slavin and Dishon explore the chaos, with a delicate harmony.

The media, that constantly re-defines the images of the perfect catastrophe, made our everyday life into a kaleidoscope of accidents and extreme events; we are continually confronted with the unexpected. The media is not interested in clarifying the accidents and disasters; it offers us a sneak- peek at these events, in the form of "news flash" on the television screen (which Virilio defines as "the museum of disasters"), or images in the paper. This habit of consumption creates insensibility and apathy to these insane scenes that are exhibited to us, in the name of the ‘freedom of speech’. Roded, Slavin and Dishon offer a visual, surreal outlook on the poetic, spectacular catastrophe, disconnected from reality; an overlook on the delicacy hidden within power and force of disaster.

Tamar Roded- Midrasha School of Arts graduate (2011) and ST-ART resident artist (2011), exhibits a new body of work, created especially for this show. In her large scale paintings she continues the practice of her earlier work and enables a distant point of view on the demolishing urban space. The sceneries portrayed in her work, defined by a black and white distinct background, purify the poetic aspect of the destruction. Roded manages to create a sincere moments that reach their peak in the form of a sculpture-  a windmill of emptiness, made out of polystyrene flakes.

Ran Slavin- Bezalel Academy of Arts & Design graduate (1990) and a Givon Gallery artist, exhibits his video work "Organic Urbanic"(2002). He also displays prints from this video and from the video work-“The insomniac city cycles"(2009). Slavin who has won several awards (such as ‘The Young Artist Award’, 1994, the Rabinovitch Fund Award, the Paiss and more), also participated in various international exhibitions and art venues. Parallel to this exhibition, Slavin exhibits a solo show in the Givon Gallery- “URSULIMUM”. 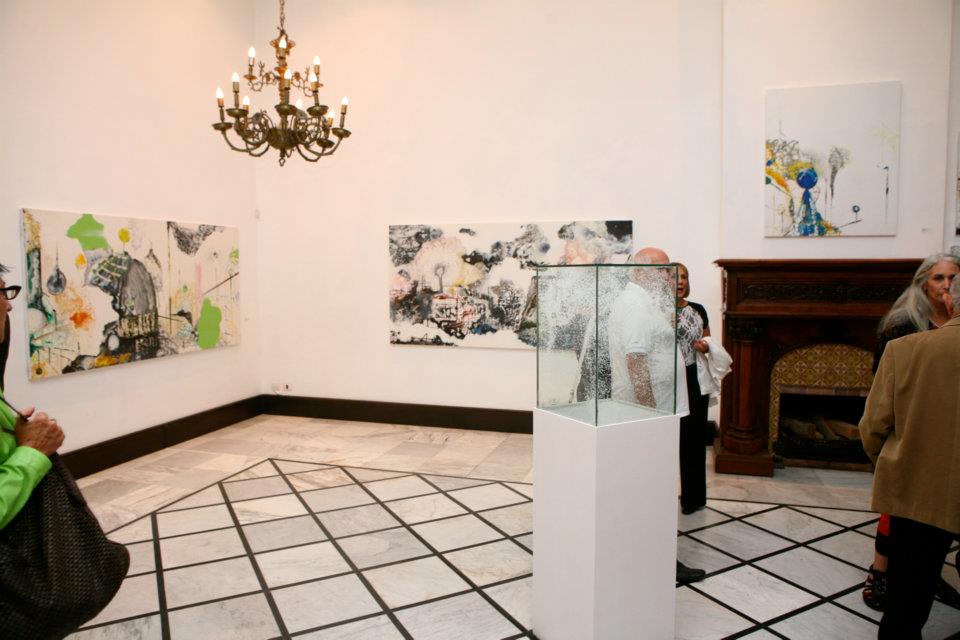